30 Years On: How the miners’ strike changed women’s lives 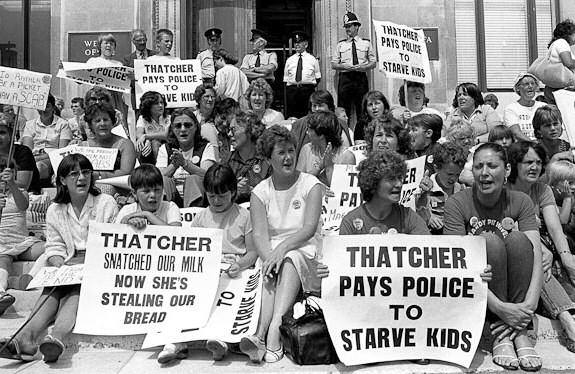 Tens of thousands of women were part of a huge support network, fundraising and picketing during the Miner’s Strike 1984-85

Sarah Wrack spoke to Mary Jackson, who was involved in the strike in Yorkshire.

Why did women get involved in the strike?

Personally I got involved when they sent the horses and the troops onto my street… There was absolutely no option but to get together to feed the kids and support the miners – women in their traditional role of feeding people. And raising money – writing to everyone we could think of, trade unions, buckets on the street outside supermarkets collecting food and money.

But then as more and more miners got arrested, the bail conditions were that they didn’t go on picket lines or demos. So they swapped places and the men moved into the kitchen, or a lot of them, and the women moved onto the picket lines.

What effect do you think the strike had on the women who got involved?

It totally changed women’s lives. They moved out of the house, out of the kitchen. It wasn’t that none of them worked, but when women worked in those days it was very much ‘nip out to work quick while the kids are in school, get back in time to get tea ready for everybody’. Whether women worked or not, the traditional role was still there.

Men changed tremendously towards women. It was a horrendous time and a defeat but it politicised a whole swathe of people, particularly women. And they’ve never lost it. We’ve bred it into our kids.

The Times called the involvement of the miners’ wives “a turning point in the strike” at the time – why do you think that was?

It gave the men heart. They were worried about feeding their kids. Initially people did deals with the mortgage companies, cashed in their life insurances. But then all that was running out, it was getting near Christmas, and men were worried.

The support networks and the women getting involved made it impossible for the media and the government to organise an anti-strike, back-to-work movement.

And if the women hadn’t stepped in, managed the finances from practically nothing, and then stepped onto the political and industrial plane, I think the strike would have ended much earlier than it did.

But if the trade union leaders had brought the other unions out in support, if the TUC had got off its knees and organised a one-day strike, then the battle would have been different – Thatcher would have been on her bike long before she was, and the working class wouldn’t have had suffered the defeat and the consequences.