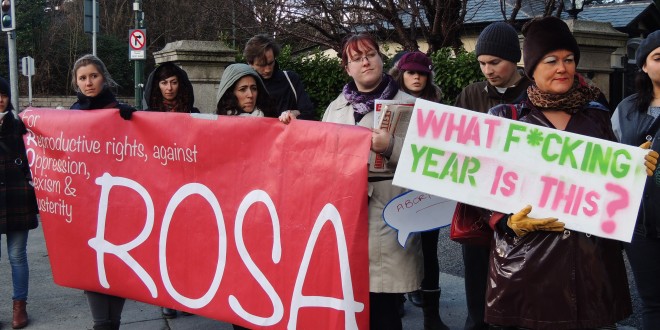 Abortion in Spain: A political issue?

Thousands of people have taken to the streets across the Spanish state protesting against new legislation governing abortion that represents a huge step backwards for women.

Before 2010, Spain was part of a handful of countries in Europe where abortion was not recognised as a basic right. This changed with legalisation passed under the government of Zapatero. That law provided for the right for a woman to access an abortion up to 14 weeks, or up to 22 weeks, if the mother’s health was at risk or the foetus showed signs of severe abnormalities. Almost 4 years later and under a right-wing government, the new bill proposed by the Minister for Justice, Ruíz-Gallardón, will only allow abortion in cases of rape or where women can prove that having a child would threaten their physical or mental health.

In 2010, the law was implemented in the context of government imposed E15 billion in cuts in an attempt by social democrats attempting to appear progressive to an angry population.

In 2012, the government changed, the austerity agenda had not. 13% and 21% of the budget has been cut in terms of healthcare and education respectively. Women have largely shouldered the cost of those cuts. The new law will endanger the lives and health of women throughout the Spanish state, particularly the huge swathes of whom are ravished by the unemployment and poverty that austerity capitalism has bestowed upon them.

Spain is an example of the unjust workings of a system ruled by a dominant class that is absolutely uncaring about the will of 80% of the people who support the 2010 law. The roll-back of abortion rights shows the necessity for a broader movement and struggle for women rights that also seeks to end the rule of an unaccountable elite in society, who serve the needs of the super-rich and are hugely subject to influence by backward religious and sexist ideas.