Home » Blog » Austerity » Challenging the Rule of the 1% Super-rich 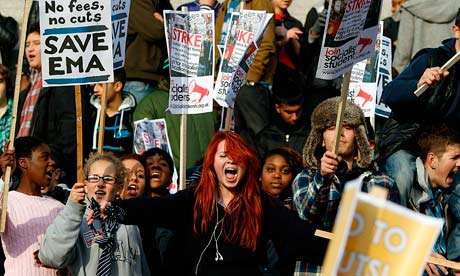 Challenging the Rule of the 1% Super-rich

The global capitalist crisis affects girls and women especially harshly. The World Bank estimates that a 1% fall in economic output increases infant mortality by 7.4 deaths per 1,000 girls against 1.5 for boys. Similarly the crisis has resulted in a 29% fall in primary school completion for girls globally, and a corresponding 22% fall for boys. In the richest country in the world, the US, 17 million women were living in poverty in 2011, and 12.6 million men.

The inequality is despicable – and so is the enormous poverty and destruction of living standards that the profit system is bestowing upon the majority of women, men, children and young people of the world. It’s more apparent than ever that the struggle for poor and working class women in particular, to achieve rights, decent living standards and equality needs to be an anti-capitalist struggle. How can equality be achieved in an era of austerity that destroys health, education and jobs? Do we want to just settle for equality with working class men who themselves are experiencing unemployment and pay cuts?

The reactionary nature of capitalism is illustrated clearly in the US where 40 years ago this year, Roe V Wade, the historic Supreme Court ruling that effectively legalised abortion was implemented after a tremendous struggle from below. Despite this struggle and ruling, over 100 restrictions to abortion access have been implemented in the US in the last two years. Seven out of ten women who have had an abortion in the US would have preferred to have it sooner – many of these women were forced to delay the procedure because of the prohibitive cost. In a profit-system that’s in freefall and that has privatised healthcare at its very heart, the struggle for free abortion and health services is a radical, even revolutionary one.

Oxfam has reported that the $240 billion net income of the world’s 100 richest billionaires in 2012, constitutes enough wealth to end global poverty four times over. The hoarding of wealth by the European and global elite must end. We need a mass movement of ordinary working, unemployed and young women and men for the public ownership of wealth and resources.

It’s vital that women participate at the front and centre of such a movement ensuring that issues of reproductive rights, equal pay, free childcare, and an end to the macho culture that permeates capitalism that promotes rape and violence, are all taken up by the movement as a whole – in the tradition of the great socialist and suffragette Sylvia Pankhurst who, in Britain over 100 years ago, campaigned to ensure that the suffragette govement promoted votes for all women and men, not just those who owned property, by linking up with the labour movement, supporting strikes of male and female workers, promoting women’s rights and issues in the context of the quest to build a movement of all ordinary women and men against the exploitative capitalist system.