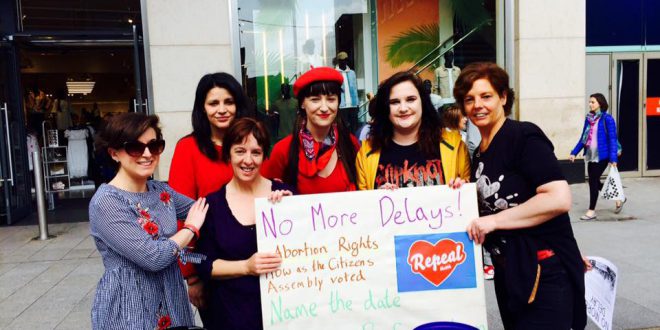 Referendum without delay
Let us have our say!

After the Citizens’ Assembly’s historic vote for abortion rights, David Davin-Power reporting for RTE News said that the job of the Dail committee would be to ‘water down’ the proposals. The Dail Committee needs to meet immediately, agree a date for a repeal referendum, with a view to a swift implementation in full of the Citizens’ Assembly recommendations for pro-choice, pro-health legislation. This should happen by the 28 October 2017, which will be the 5th anniversary of the death of Savita Halappanavar, who died as a result of Ireland’s Medieval abortion ban.

ROSA will be building up a massive campaign of political pressure over the course of the summer – aimed at TDs and Senators on the Dail Committee, and TDs in general, in which we organise workshops in advance of organised visits to TDs clinics, campaigning in localities in order to drum up mass support from the TDs’ constituents etc. We will say to them that they have no right to offer us anything less than what the Citizens’ Assembly has advocated. If the TDs themselves will not support the findings, then at least let the people have their say. How, from a democratic viewpoint, can the political establishment give us less to vote on than what the Citizens’ Assembly advocated? If the current Dail won’t implement the Citizens’ Assembly findings, then there should be a plebiscite (a popular vote that does not pertain to the Constitution) in which people can choose to endorse (or not) the various findings of the Citizens’ Assembly. This way, we could build a mass movement not only for a ‘Yes’ to delete the 8th amendment abortion ban from the Constitution, but also to call on the public to endorse women’s health, and a pro-choice position.

The public are way ahead of the conservative political establishment. Some examples include:
– that the only registered political party in the Dail that has a pro-choice position is the socialist Left alliance in parliament – Solidarity-People Before Profit
– all the other parties have a position that is behind , or way behind the Citizens’ Assembly recommendations*
– Sinn Fein, for example, do not even support abortion rights on broad health grounds, and the Labour Party only support abortion rights if there is a ‘real and substantial’ threat to health
– Micheal Martin, leader of Fianna Fail believes in forcing pregnant rape victims to remain pregnant, against their will
– Both Varadkar and Coveney have been back-pedalling on the Citizens’ Assembly recommendations and are both anti-choice

We cannot let them hold us back any longer. We need YOU to sign up today to help ROSA build a massive campaign of political pressure to LET US HAVE OUR SAY.

*Since the Citizens’ Assembly, the Social Democrats have issued a press release saying they support its findings, but prior that had a ‘repeal’ only position