Like today, in February 1984, the tensions between Dunnes management and Dunnes staff were strained. At one meeting between the union and Dunnes management the list had roughly fifteen to twenty items to be discussed – for instance the workers were only allowed two bathroom breaks during their 8 hour shift. If you wanted to use the bathroom, you had to ask a manager if you could go to the bathroom, be put on a bathroom waiting list, and could be waiting over an hour by the time you were allowed leave your till. The Dunnes staff were extremely unhappy at their unfair treatment.

During Easter 1984, the motion was submitted to boycott all South African goods and services, and the Dunnes workers were happy to partake in any motion put in place by their union (IDATU).
On July 19th, 1984 the Dunnes workers were warned by management that anyone who refused to handle South African goods would be suspended. They lined up all the staff and asked them who was part of the union and who was intending not to handle the South African goods. They then picked all these people to work on the tills for the day and put managers behind the tills to make note of anyone who tried to refuse to handle the fruit.

Mary Manning was the first person to have a customer come to her till with Outspan Grapefruit. She explained to the woman that as per union policy she could not handle South African fruit. The customer happily sat the fruit aside. Immediately after the woman left the shop, Mary was told to close off her till and report the manager’s office. She was suspended and the other union members closed off their tills and left the shop. A picket was placed on the store that day. 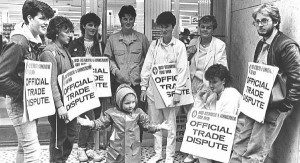 For the first few months of the strike the young strikers really struggled. They were living on twenty-one pound a week as strike pay. They were met with general abuse by people who believed that by not purchasing South African produce you were starving the black workers. The church did not support them either. Arch Bishop Eamon Casey would take the pulpit on Sundays and condemn the strikers. Nuns would purposefully go to shop in Dunnes and argue with the strikers. The broad anti-apartheid movement showed initial support, but thought it was embarrassing when the strike wasn’t resolved and distanced themselves from it. They were ignored by the Labour Court who said they couldn’t force Dunnes to negotiate and by the government who saw them as a nuisance. They were labelled communists and were treated abusively by their own co-workers. Those who didn’t go on strike and continued to work in Dunnes would throw old fruit and vegetables down on top of the strikers as they picketed outside. Even their own union executive turned on them as they were recorded describing the strikers as “a bunch of girls bored at the till, having a lark, they’d tire of it quickly”. Though they tried to stop deliveries to Dunnes, Ben Dunne hired a bin truck to sneak the deliveries in at night. Some of the strikers were mothers and one of them was having her home repossessed.

While the strike had started off optimistically, in the heat of July summer, they now felt isolated and abandoned, picketing outside every day in the freezing winter. It was during this time that they met Nimrod Sejake, a member of the left wing of the ANC and a black South African who had experienced the horrors of apartheid first hand. Nimrod was also a member of Militant, forerunner of the Socialist Party in Ireland that worked as a socialist tendency inside the Labour Party. He encouraged the strikers and informed them of why they needed to continue the struggle.

On December 8th 1984, the strike took a turn. The girls received an invitation from Bishop Desmond Tutu to picket the South African embassy on Trafalgar Square with him. The strike began to gain momentum from this point on. The strikers gained international importance, invitations for them to speak to university groups, unions and community organisations. By February 1985 the strike was a regular topic in the Seanad and the Dail. The Labour Party called for a code of practice in relation to sale of South African produce, but did little to help the strikers. When Ruairi Quinn was contacted by the union it would take him two months to reply. The strikers had only wanted the right to not handle apartheid fruit. Dunnes would not give them that right. This strike was so unique because it wasn’t about a labour dispute – it was a moral issue.

Despite the lack of support from the government the strike was becoming a movement. In March 1985 Bishop Casey launched his Lenten campaign and changed his tune stating the Dunnes strikers “deserve our respect and solidarity”. By April 1985 a 24 hour picket was now in place and they gained massive support from ordinary people. Desmond Tutu invited the strikers and Ben Dunne to South Africa to witness first-hand the realities of apartheid. Ben Dunne claims he never received this invitation. The Irish Anti-Apartheid movement described going to South Africa as “a breach in the cultural embargo” and privately stopped supporting the strike. The union executive also openly stopped supporting the strike stating unions had no business making political policies.

On July 8th 1985 the strikers flew to South Africa only to be detained in the airport, held under armed guard for 8 hours and then sent back to Ireland on the next flight. This only created more support for the movement. Despite this, they were receiving increased harassment on the picket line – both verbal and physical abuse from the Gardai. The special branch visited numerous strikers’ homes and attempted to intimidate them. The guards were not objective, they were working with Dunnes. When an investigation was launched, Michael Noonan, who was Minister for Justice at the time, had the gardai investigate themselves. Unsurprisingly, they found that they had not done anything wrong!
The union leaders now felt that awareness about apartheid had been raised and it was now time for the strikers to go back to work. The strike pay had dried up. However, through the dedication of the strikers, they embarrassed the government into introducing sanctions against South African produce. In February 1986 Ruairi Quinn announced that that a ban would be placed on South African imports on 1st of January, 1987. This meant the girls could not back to work until the ban was in place because they still refused to handle the South African produce.

In typical Dunnes fashion, the company continued to order produce until the day of the ban so the strikers had to wait until April 1987 – when all the produce was off the shelves – to return to work. The strike had been going on for almost three years at this stage. It is important to understand that in the beginning the strikers had no real knowledge of apartheid or South Africa (they joked themselves that they would have boycotted Irish produce if it meant getting back at Dunnes) but by the end of the strike they felt so passionately about supporting the black unions and workers in South Africa, that even touching items produced by slave labour felt like a crime to them.

The strikers went back to work but none of them remained there very long. The bullying and intimidation they were met with by management and co-workers became too much to put up with. Karen Gearon was unfairly dismissed and although she won her case in the Labour Court, it wasn’t worth the paper it was written on because she was blacklisted as a trouble maker and couldn’t get a new job. The strikers received no real recognition from the government for their massive role in the introduction of sanctions against South African produce. Their first real acknowledgement was when Nelson Mandela invited them to a lunch with him so he could pay them tribute for their part in the struggle.

This inspiring struggle has been immortalised in the recent documentary, “Blood Fruit”.
You can see the trailer here: https://www.youtube.com/watch?v=W5tIr45nmxw