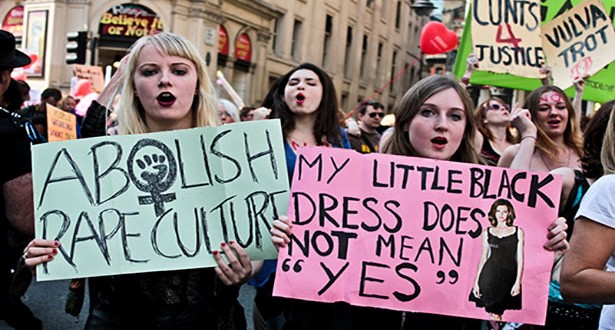 Not Enough Rape To Count

In March this year a 15 year old girl was brutally gang raped by six boys in the same age. The six boys recently acquitted by the Appeal Court, were earlier this year sentenced for aggravated rape in the District Court. This is an article by Caroline Holmgren, member of Rättvisepartiet Socialisterna (CWI Sweden).

Our society is bleeding, a large, infected wound and it doesn’t matter how much we try to wrap it and bandage it, it bleeds through. It has not only gone to hell, it has taken the wrong exit and run so far in the wrong direction that we have somehow lost the perception of what is up and down . Our society has become a theatre piece. A tragicomic performance where no one knows whether we will choose to laugh or cry. When six boys decide to rape a lonely girl at a party and are later acquitted of the offence, how can this be possible? The saddest thing of all is that it is quite real and it’s happening here; where we breathe, live and work.

In March this year, six boys were accused of raping a 15 year old girl at a party in Tensta. The sequence of events diverged and one of the boys refused to even having attended the party where the rape took place. The district court did not consider that likely and sentenced all according the girl’s story.

However, the Court of Appeal made an entirely new assessment and they took the boys’ side and stated that it was not surprising that they lied because they were nervous. They also said that the girl may well have been in a vulnerable position, but not in a helpless state as she had the opportunity to leave the room, but did not. Being in a helpless condition means that the victim, for various reasons cannot say no. For instance, in the case of intoxication or unconsciousness. Rightly so, the prosecutor pointed out that the fear is just as paralysing. In addition to the rape charges, the prosecutor wanted the charges of sexual harassment to be brought against them also but they were acquitted at that point.

By law, there is a set of specific circumstance which must be fulfilled in order to be considered a rape victim. In this case, she was not one of them. Apparently, screaming, not leaving the room after the incident and not being able to distinguish faces in the dark was not considered enough resistance.

She was not raped enough to count. It is not possible to put a template on how a person should behave after such an event. We are all different and react differently. When a rape has occurred, it has taken place regardless of the reaction of the victim.

This factor, as well as clothing, environment and other aspects, should not be counted at all in whether the event occurred or not. What message does this give? How far will it have to go before someone pulls the handbrake and acknowledges the dirty legal system?

The boys who raped a young woman in March went free, leaving the courtroom with a slap on the wrist because they kept the light off and this made it difficult for a conviction.

Swedish news feeds are flooded with new headlines and this story passes as commonplace. Yesterday, six of the top ten stories included the words sexual harassment, rape or molested in the headline.  However, the words have become so normalized that few bother to respond any more.

In South Africa, a woman is raped every four minutes. In the Congo, it is more dangerous to be a woman than a soldier. One in every four women in Sweden has been or will be the victim of sexual crimes during her life. Around the world, women are still slaves and prisoners in their own bodies. Everything is firmly regulated in the patriarchal gender power order. Capitalism propagates this and the law reinforces it. Pushing aside the rights of women and depriving us power is part of the oppressive society that we live in. Rape is a weapon, and women are targets.

Through laws and actions men continue to take control of women’s sexuality and their bodies. For the people tricked into thinking it is getting better and more equal, this is not the case. Each day new attacks on women are reported and capitalism’s spreads its wings out on all aspects of life and drills deeper into the structures of society. We can also see how women’s hard-fought rights have been withdrawn.

Every day I hear a new woman falls victim to the brutal exercise of power and I am more saddened than angered. For an attack on a woman is an attack on all women. But together we can struggle to fight. We can demand that the law gets changed by introducing tougher measures and increasing penalties. But it will not change the situation. It is only when working class women and men struggle together to smash capitalism and patriarchy that we may be free.

Previous Miley Cyrus & Sinead O’Connor – Sexism in the Music Industry in the Spotlight
Next Protest in Solidarity with the Russian LGBT Community & Pussy Riot Activists!

95th Anniversary of the Death of Rosa Luxemburg – Public meeting