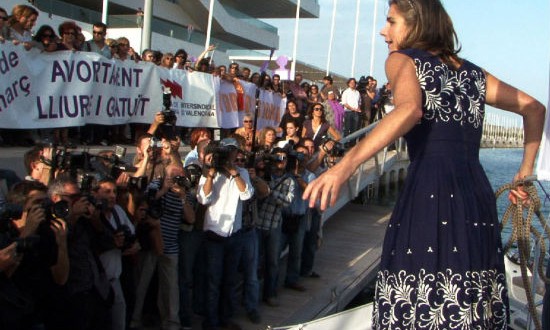 The documentary film “Vessel”, screened by ROSA in December, is an inspiring account of the development of Women on Waves and Women on Web. It charts how a group of women led by Dr. Rebecca Gomperts, endeavoured to provide abortions to women who lived in states that banned or restricted abortions. They wished to create a space where the only permission a woman needed to continue with her pregnancy was her own.  The audacity, passion and bravery of the women stand out as they overcome one barrier after another to pursue this goal.

“Vessel” highlights the discovery by women themselves of the Abortion Pill which was actually developed originally for Gastric Ulcers. Women on Waves/Women on Web make use of cartoons instructing women on how to access and safely use abortion pills.

Women on Waves travelled the world getting this information out via their helpline and various direct actions including hanging a huge banner from the enormous statue of the Virgin Mary in Quito, Equador.

The women were harassed by aggressive, violent protesters in every country, the overwhelming of majority of whom were men.

Throughout the film, emails from women in desperate situations are shown, many from Ireland. Some are victims of rape, some are women who cannot afford another baby, some who say they are just too young to be a mother. The common thread of the emails is fear and desperation. The Women on Web doctors are helpful and supportive.

For me the most poignant part of the film was when a young Irish woman says “I cannot go on with this pregnancy but I am not a monster.”

“Vessel” finishes by depicting the transition to Women on Web which posts safe abortion pills to women around the world after an online consultation with a doctor on womenonweb.org.

2015-01-15
admin
Share
Previous The Political Legacy of Malcolm X:50 years after his Assassination
Next Review:‘Eleanor Marx – a life’