The routing of Renua in February’s General Election is an example of the rejection of backward and rightwing politics by the electorate. An Amnesty/Red C poll released just after the General Election shows that 73% of people want there to be a repeal 8 referendum. The poll also is an indication of the continued growth in support for abortion rights, including 90% believing that women’s health must be the priority in any reform of abortion laws, and 68% agreeing that the current law is “cruel and inhumane”. 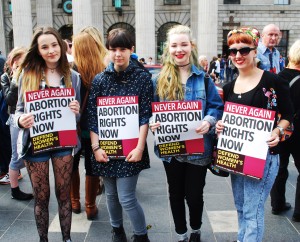 Despite the shift away from the establishment in the General Election – FF and FG receiving less than 50% of the vote in an historic development – it’s likely that a very rightwing, establishment Government will be formed through some arrangement of FF and FG that will try to deny us our democratic right to a referendum. However, it’s clear from indications from Simon Coveny, FG TD among others, that the mass boycott of the water charges may force such a Government to abolish water charges. This shows how people power works! We must take a similar approach to the fight for a woman’s right to choose – we need to ramp up the active movement to demand a referendum to repeal the 8th and to lift Ireland’s Medieval and dangerous abortion ban, once and for all.

Join with ROSA and our upcoming actions to help to build such a revolt from below – an unstoppable movement to drag the backward political establishment into the 21st Century, kicking and screaming. Such a movement for women’s equality and freedom, linked to women having the right to control their own bodies, could also push to separate church and state and to end all the social and economic inequality rife in the midst of a neoliberal recovery for the rich that has seen homelessness, low pay and the working poor skyrocket.