Home » Blog » I’ll be protesting on March 8th – for abortion rights in Ireland, Spain and worldwide 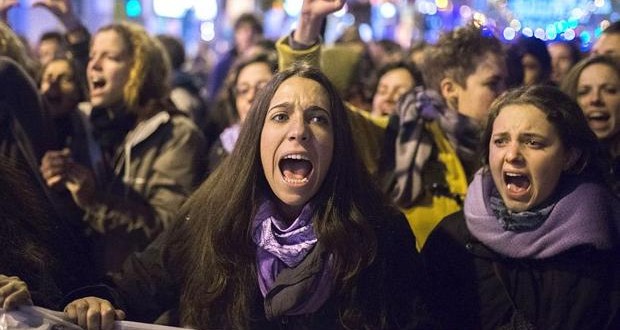 I’ll be protesting on March 8th – for abortion rights in Ireland, Spain and worldwide

On Saturday the 8th March, I we will be marching for International Women’s Day, not only to support a woman’s right to choose, but out of solidarity with all the Irish people who are disgusted about the weakness of the legislation passed last year, a half-crafted solution that fails to address women’s reproductive issues and that doesn’t reflect the popular sentiment towards women’s right to choose.

I come from Spain, where, after many years of dictatorial oppression, we achieved abortion rights. It was only a couple of months ago when the Government of the Popular Party decided to take us back in time to recall a more obscure past. Before its reform, voluntary termination of pregnancy was permitted up to the 14th week in any of these cases: rape, risk to the mother’s physical or psychical health, and damage to the fetus (such as malformations and congenital diseases). Now, abortion is only legal in the first two cases and timeframes are much more restrictive. Besides, in cases where there is a risk to the mother’s health, the process to demonstrate that such a risk exists can take up to an additional month – something that a pregnant woman cannot really afford.

One may wonder why the Popular Party took such a retrograde turn, especially now that their popularity has sunk to a chasm. The response: a handful of ballots. Indeed, this reform is an attempt of the Popular Party to reconcile with their core base: right-wing conservative people who became disenchanted with their clumsy politics since they came to power.

As woman whose right to choose has been seriously limited due to political greed, it breaks my heart to see how Irish women (and women in general) are being neglected by the very people who should be serving them and not trading off their fates to nourish the favour or the Catholic Church, a wealthy conservative minority or any other ‘key allies’. As a woman and as a citizen of the world, I believe that it is my duty to raise my voice against any actions that constitute a threat to women’s freedom in particular and to human rights in general. In Spain we say that “silence is consent”. Well, I won’t remain silent.

However, this is only the tip of the iceberg. Women have been oppressed since time immemorial –probably from the moment that someone decided that we should be second class-citizens so that the “first-class citizens” could live more comfortably. The concentration of surplus and resources in the hands of a powerful minority relegated women to slavery, economic dependence and arranged marriages to mention but a few. Fortunately, thanks to the brave women who stood for a fair society throughout the years, we are in a better position and slowly getting closer to that cherished ideal of equality. But we aren’t quite there yet. Especially not when being an ‘über-women’ is a requirement: perfect dolls, loving mums, abnegated workers and passionate lovers –all in one lot.

Because we are still the main target for the clothing and cosmetic industry. Because more often than not, we have to demonstrate twice as much as a male colleague to get a position of responsibility. Because we still earn less than our male counterparts. Because raising children into good citizens is not seen as ´work’ (even when it’s one of the important things someone can do), or because we are pitied or shunned upon if we choose not to follow that path. Because, in one way or another, we are still treated a commodity.

For all this, we shall protest. We are all together in this fight, men and women, Irish and non-Irish. If you believe that basic rights shouldn’t be put at stake, join us in this protest. For real equality, for real democracy. Now.

2014-02-17
admin
Share
Previous I’ll be protesting on March 8th-Why School Students should come to the International Women’s Day Protest
Next Among other things I am a mother and I will take part in the protest on International women’s day: