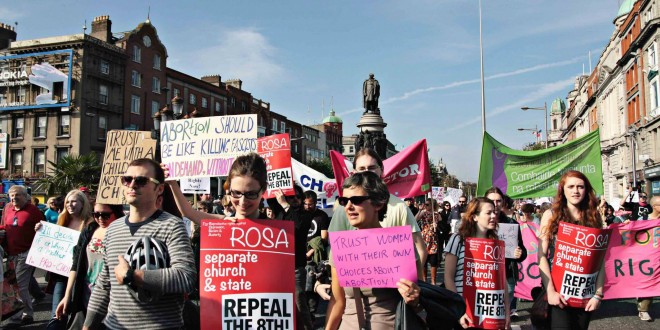 Saturday 8 March is International Women’s Day. We will be marching to support a woman’s right to choose, end violence against women and to stop austerity.

As a student myself, I feel it is very important for adolescents to be aware of these problems. Therefore it would be extremely beneficial for them to come to the protest. It can be hard for young people to feel that they can relate to such problems as they are most likely not exposed to them in the same way. However, I think it is very important for young people to be politicised.

We are humans – not just consumers for the beauty industry

1,300 girls aged 7-21 were surveyed last year in Britain. Of that number, 33% of women and girls were unhappy with the way they looked. Of girls aged 14-16, 51% were unhappy with their appearance. At first glance it may not seem like that much, but it is more than half.
Younger girls today are being increasingly sexualised. It is no longer seen as ‘trying to look older’; it is now simply seen as ‘being a girl’. Young girls are no longer able to develop themselves personally or to explore their sexuality. They are simply forced to grow up too quickly. Shocking statistics show that 4 out of 10 girls aged 11-16 wax their bikini line and wear padded bras. 2 out of 3 of 7-11 year olds use nail polish, half wear makeup and one third wear high heels. I find this scary because we are being forced out of our childhood by the media, so that we can become consumers for the beauty industy.

Adolescent girls have lower-self esteem than ever. When we go into a shop and see magazines shaming celebrities for gaining or losing weight, (when they look completely normal), how are we supposed to feel confident? We begin to question everything about ourselves as we are bombarded with images everyday that tell us what ‘beauty’ is. Our bodies are dismembered as they are analysed to the point where nothing is ever good enough. I think this is something all women can relate to.  This has also lead to growing numbers of young girls with eating disorders and depression.

Catholic domination of schools is Medieval

In Catholic schools all over Ireland students are being presented with information about abortion that is completely biased and more than usually false. In a recent survey of 14 school students, 5 other under 25s and 1 parent it, was found that 8 out of these 20 had reported having been presented with anti-abortion messages which mostly came from teachers. Schools are having talks from organisations which tell them that women who get abortions feel suicidal and harm themselves. They are also told that women who have miscarriages and who have previously had abortions more than likely feel they are getting punished. Students are told horrible anecdotal stories about families breaking down in order to scare them away from being pro-choice.

To scare students even further, the speakers give graphic and detailed accounts of the pain that women ‘have to go through’ during the process. Completely biased statements like “The most important person during pregnancy is the baby” are made.

It’s important for teenagers to know about these issues. For pupils in Catholic schools, it can be difficult express how controlling the system is. It’s time to end Catholic domination over our primary and secondary schools as it skews the sexual education classes. For young women who are suffering from low self-confidence because of what we see every day I think it is actually helpful to know that this is what capitalism wants us to think is beauty is. I think it can be truly inspiring for young women and young men to see things from a different perspective than we have been told to.

2014-02-11
admin
Share
Previous Beyonce’s trivialising of violence against women; Should be the last word in ridiculing her ‘Feminist Icon’ status
Next I’ll be protesting on March 8th – for abortion rights in Ireland, Spain and worldwide