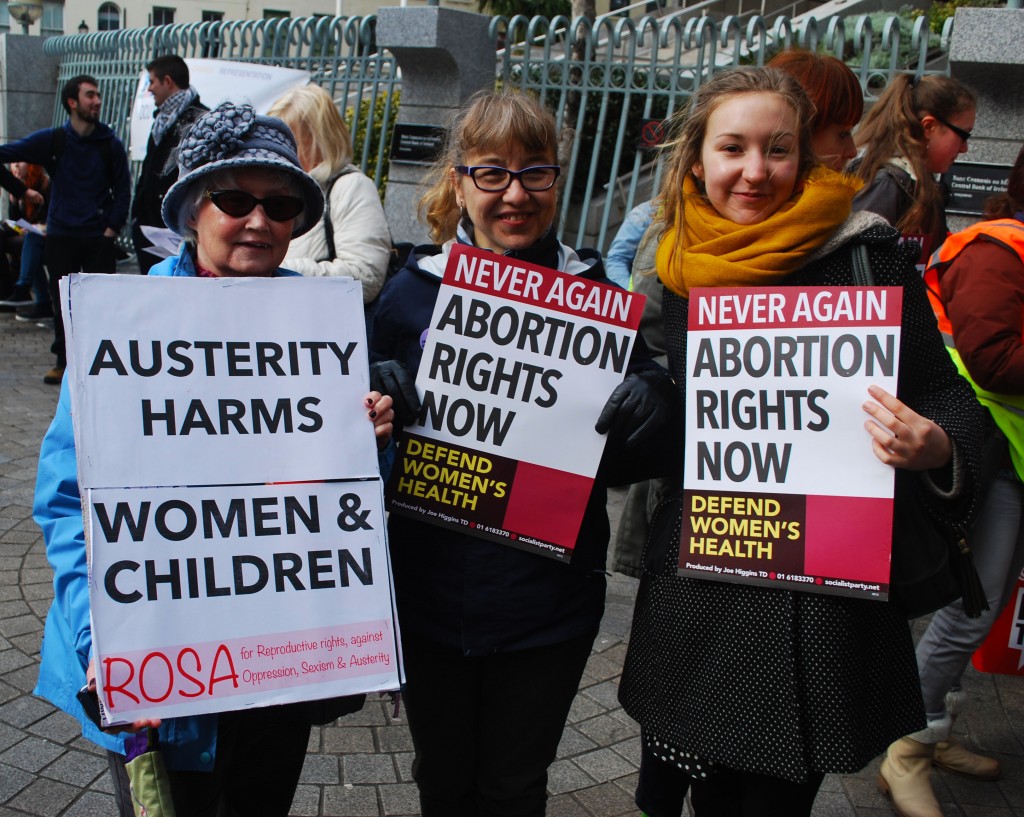 Approximately 25% of the world’s population lives in a country where abortion is restricted and is only allowed when it poses a risk to the life of the pregnant woman. In Europe, Ireland and Malta are the most restrictive, on par with countries like Chile, Brazil and El Salvador in Latin America, Angola, Somalia and Nigeria in Africa, Afghanistan, Syria and Yemen in the Middle East and Indonesia, Laos and the Philippines in Asia to cite but a few. In total, 66 Countries have such restrictive bans on abortion.

Only 39% of the world’s population lives in countries where abortions are accessible without the need for a legal justification. However, other factors may restrict a woman from accessing a termination such as her financial situation or the lack of readily available information.

Sexual or physical violence has been experienced by an average of 35% of women worldwide.

Up to 15% of women in Japan and 71% of women in Ethiopia have reported some form of either sexual or physical violence by their partner while in rural Bangladesh, 30% of women reported their first sexual experience as forced.

As many as 1 in every 5 women is a victim of rape or attempted rape during her lifetime in Ireland. Worldwide, this figure is 1 in 3. Moreover, just above 1 in 10 women worldwide has experienced some form of sexual violence.

A 2007 Research shows that in the US, 45% of women murdered were killed by their current or former partner. In Ireland the figure is 52%.

Female Genital Mutilation (FMG) is a barbaric procedure to completely or partially remove parts of the female genitalia for non-medical reasons. This practice is mostly imposed on girls aged between 0 and 15 years.

It has been estimated that 3million women worldwide are at risk each year of undergoing some kind of FMG. That’s approximately 8000 girls per day.

This practice is more prevalent in Africa, however it is present worldwide.

FMG is used as a way of controlling women’s sexuality, in order to preserve a woman’s virginity or reduce her sexual desires.

Consequences of FMG include severe pain, difficulty in passing urine, causes various infections sometimes leading to death and is of course a huge trauma.

It was estimated that 80% of people trafficked for sexual or other forms of exploitation are women. International research shows that 95% of trafficked women are subjected to physical or sexual violence.

89% of women involved in prostitution want to stop but can’t do so for various reasons: coercion, financial situation being two major factors.

Workplace conditions for women around the World / Gender pay gap:

Despite the fact that discrimination on grounds of gender is illegal in most European countries; the pay gap persists. On average, men were paid just over 17% higher wages than women in 2008. Even though that figure decreased slightly in 2010 to around 16%, it has increased again in recent years.

South Korea has one of the highest pay gaps in the world with 37.5%. This is closely followed by Russia, Estonia and Japan with pay gaps of 32%, 30% and 27% respectively. The list of 20 countries with highest pay gap also include France, Germany, the UK and Israel with percentages higher than 14%.

Globally, women mainly fill precarious work positions. From insecure jobs to part-time, informal  & low paid work a number of sectors have a predominant female workforce. Precarious work is on the rise with the growing popularity amongst the ruling class of zero hour contracts and other such schemes and the outsourcing of some public services to private companies.

The lack of recognition of women’s unpaid work in terms of childcare, housework etc. is huge worldwide. Women are still expected to carry out unpaid work in the home by societies around the globe.