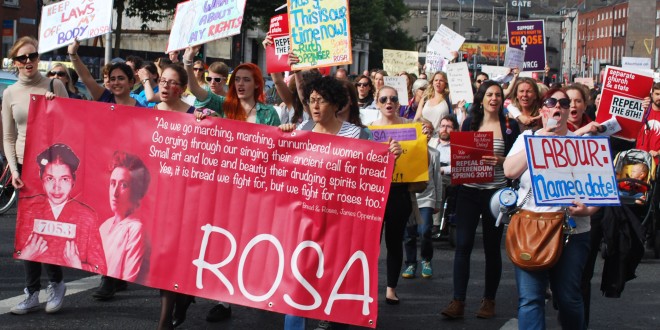 Laura, you and other women in the Socialist Party established ROSA (for Reproductive rights against Opression, Sexism and Austerity) two years ago, as an anti-capitalist initiative to fight women’s oppression. ROSA is at the forefront of the struggle in Ireland to repeal the 8th amendment which is a constitutional ban on abortion in Ireland. ROSA also established a campaign last year called “Repeal the 8th in May 2015” with a view to increasing pressure on the Labour Party in particular, who are part of a coalition government, for a referendum (necessary to change the constitution and lift Ireland’s abortion ban) alongside the Marriage Equality referendum planned for May. Getting an abortion is a felony in Ireland. What are the consequence for women?

The consequence for women is that women have to travel – the statistic is about 12 women a day do so from Ireland North and South to access a safe and legal abortion abroad, usually in Britain. This is at great cost – a whole the trip can set women back hundreds, even up to a thousand euro – and of course at great emotional cost too as travelling is burdensome and isolating. This is an extremely dangerous situation for women whose health is at risk by their pregnancies, as Savita Halappanavar’s was in 2012 when she was having an inevitable miscarriage but was denied an abortion due to the existence of a foetal heartbeat. Savita tragically died at the hands of the 8th amendment – the constitutional abortion ban that equates a woman’s life with that of a foetus. The need to travel to access a safe and legal termination is prohibitive for those women who have been impoverished by austerity. It’s a huge problem for migrant women without papers. However, more and more women are accessing safe and illegal abortions in Ireland with pills, through womenonweb.org , a life-saving and invaluable service run by pro-choice doctors in the Netherlands that helps women in countries where abortion is banned and ROSA engaged in an action last year called the Abortion Pill Train( http://vimeo.com/110596301 ) to highlight the womenonweb.org service and also to publicly break the law and pressurise the government and establishment to change the law. Technically, women who get abortions in Ireland are breaking the law and are liable to up to 14 years in prison, if prosecuted. However, it’s politically impossible for the state to do this, given that there would be an outpouring of anger and disgust from the growing pro-choice majority in the state. The fact that the state made no arrests despite the Abortion Pill Train activists contravening laws surrounding women’s reproductive rights, is testament to that reality.

– In Germany we have a law against abortion too, but women can get an abortion if they get a consultation first. So getting rid of the law that bans abortion would be a matter of adjusting the law to reality. In the republic of Ireland 70% of the people support the extension of abortion rights, still the bill to provide for abortions in circumstances where there is a fatal foetal abnormality was rejected by 104 votes to 20 in parliament. How comes that most of the parties represented in the Dail still cling to these reactionary laws . How can they not even allow a tiny reform and force women who carry a foetus with no chance of survival?

Good question! It’s a huge indictment of the backward nature of the establishment in Ireland that despite the fact that many polls have showed that over 80% of the population support this small reform, only 20 TDs voted for it. As well as the fact that clearly many of the establishment TDs themselves are quite backward on a personal level, it’s also true that all the main parties are afraid of taking on the Catholic Church that has been entwined in the weak capitalist state in Ireland since its inception. Up to 90% of schools are Catholic-run, and the Church has representatives on the boards of most of the hospitals. Sinn Fein, who claim to be a radical anti-austerity and  left force are similarly unwilling to go into conflict with the Church, with its deputies abstaining in this vote and its leading public reps publicly reaffirming its ‘pro-life’ position recently. All of this contrasts dramatically with the reality on the ground – the Catholic Church has been irrevocably and radically undermined and there is a real yearning on behalf of young people and the vast majority of working class and middle class people from a break with such backwardness. There is a palpable desire for a progressive, secular state – an aspiration that only a genuine left political force would implement and the building of such a force is an essential task in fighting for the full separation of Church and State in Ireland – an absolute pre-condition to equality for women and the LGBTQ community.

– ROSA is actively campaigning to repeal the 8th amendement, will there be a referendum on the issue soon?

We have to make it happen! We are very optimistic. There has never been such widespread support for abortion rights and there will be continued pressure from below that ROSA and others will seek to activate in struggle. The fact that horrendous cases keep coming up as a result of the 8th – including in 2014 Miss Y, a raped, suicidal teenage asylum-seeker forced to have a C-section despite her repeated attempts to get an abortion; and a case in Christmas 2014 in which a family had to go to the High Court to seek permission to turn off the life-support machine of their beloved daughter who was clinically dead after a catastrophic accident, and 15 weeks pregnant – means that this issue is going nowhere. Even significant sections of the establishment have raised the need for a referendum, including editorials in right-wing, virulently anti-left newspapers like the Sunday Independent. We are also confident that the pro-choice side would win a referendum, though the Catholic right, hugely funded by rich benefactors from the US who see Ireland as the last bastion of Medieval abortion bans, would put up a huge fight. If we are successful in the fight for repeal, we will be faced with a scramble by the establishment to make the legislation that flows from it as restrictive as possible, only allowing for the ‘hard cases’. The bigger and more active and developed the pro-choice struggle and movement is, the more we will be able to actively fight against this and raise that women must have the full say over their own bodies as a basic question of rights, equality and freedom.

– Now for ROSA. When I attended a ROSA meeting last year, I was impressed by the great dynamic this group had. How does ROSA work? How did it develop?

ROSA is an anti-capitalist feminist initiative. We have regular discussion groups on aspects of women’s oppression and on the history of the women’s and socialist movement. It has developed precisely because, in Ireland and further afield, there are a whole new generation of young women identifying as feminist, a hugely positive development – these young women are getting active and are helping to build a new global women’s movement which is precisely what’s needed. This is happening in the context of an extreme crisis for global capitalism. Many of this new generation are organically making the link between capitalist inequality and oppression, and wish to see the building of a movement of workers, the unemployed and the poor that can challenge the private ownership of wealth, the rule of the 1% super-rich that also can and must connect and intertwine with a movement to end sexism and all oppression.