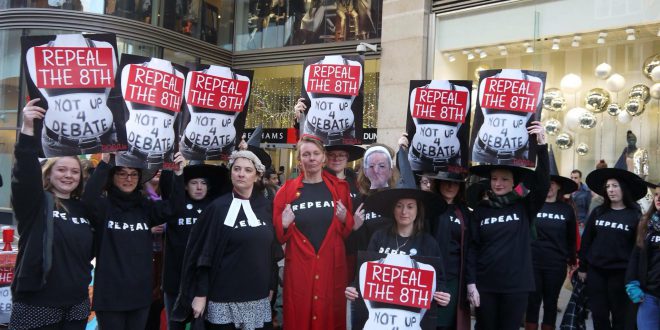 ROSA is advocating that early in the New Year, perhaps Saturday 14 January, that the pro-choice movement convene an open assembly of pro-choice activists to discuss the next steps in our movement.

Particularly in the context of the Citizens’ Assembly – a blatant delay tactic of the Government that has no capacity to make any binding decision – it’s extremely important that we build upon the momentum of September 2016’s 20,000+ strong March for Choice.

In particular, International Women’s Day – Wednesday 8th March 2017 – is an obvious focus for pro-choice activists to build for a mass action.

ROSA welcomes the discussion that a number of pro-choice activists have begun on the idea of organising a ‘women’s strike’ on this day, inspired by the phenomenal movement in Poland that managed to push back the Government there in implementing a full abortion ban. This type of action, with all genders supporting it in solidarity, would be exactly the type of radical mass struggle that could force the Government into allowing a referendum. The stronger, larger and more active a movement we build can also determine the nature of any referendum, as it’s clear that the political establishment are conspiring to link any referendum to continued restrictions on our reproductive rights.

The abortion rights movement must speak with one voice in demanding an immediate simple ‘repeal 8’ referendum. Debate on what legislation comes after repeal can happen after we take out the backward and medieval and almost globally unprecedented constitutional abortion ban. ROSA will be campaigning for pro-choice legislation that trusts women and pregnant people to make their own decisions about their bodies and health. An assembly of pro-choice activists would also be an important vehicle to discuss our broader tactics including these issues.
In order both to test the mood, and also to build for an action such as a women’s strike, it’s important to take initial steps, and intermediate actions that could build the momentum and confidence for a strike.

If a ‘strike’ was called without adequate preparation or base, inevitably a small number of dedicated pro-choice workers will respond to the call, and without sufficient organisation and strength in numbers in their workplace, could be vulnerable to sackings. Let’s remember that after the Dunnes Stores strike supported by Mandate Trade Union in 2015, disgustingly a number of workers were sacked who participated in the strike action. Mandate should have stood firm calling further industrial action to ensure reinstatement of all workers, but the point remains of the dangers of an ill-prepared or poorly supported action.

In Poland , initial warning protest actions were key to building for the strike as the movement, in the context of urgently fighting off a sharp attack, building up huge momentum.
ROSA would be very interested in discussing with pro-choice activists about what are the next steps forward to build momentum for our movement.

Particularly, our view is that if a major repeal 8, pro-choice protest march on the Dail was called for International Women’s Day, also with protests in all the major cities in the rest of the state, that that would be quite significant. International Women’s Day in recent years has had small but important actions. Stepping up to significant protest marches, including a march on parliament, would be a big step forward. It would be very poor to simply wait until September of 2017 for an annual march – we need to step things up now in the context of the Citizens’ Assembly.

Given that International Women’s Day is a weekday, if the pro-choice movement pooled its collective energies to build for a major protest march, or marches that day, it could begin to take on the character of a partial strike with workers beginning to take days off work to attend.
An assembly of pro-choice activists in January, could make a special appeal to get third level and second level students and student representatives in attendance. An important precursor to a future ‘women’s strike’ would be successful strikes of second and third level students that perhaps could be called for International Women’s Day, with students converging on town and city centres to participate in marches.