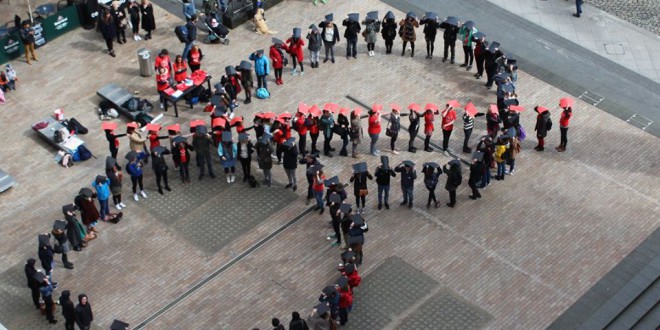 A new Government has finally been formed & its neoliberal Programme for Government will continue the assault on social welfare & public services , with women particularly victimised by this.

The fact that the 8th amendment is mentioned on page 158 of an 160 page document symbolises that this Government wants to continue to put this issue on the back-burner.

We do not need any “Citizen’s Assembly” that is an anti-democratic attempt to delay & obstruct the will of 80% of the population for a repeal 8 referendum. We also cannot trust any such initiative of the backward political establishment to deliver a just outcome.

However, it’s clear – this is a really weak Government. This must be a spur to the active movement from below as we declare that women can’t wait – repeal the 8th!

ROSA will be outside the Dail on Wed 25 May at 5:30pm to “Air Their Dirty Laundry” as we hang out our knickers for repeal on a giant clothesline on Kildare St. Join us! We will have a rally & invite all the campaigns for repeal to participate.

Here are the aspects in the Programme for Government that deal with repeal:

“We will establish a Citizens’ Assembly, without participation by politicians, and with a mandate to look at a limited number of key issues over an extended time period. “
“the Citizens Assembly to make recommendation to the Dáil on further constitutional changes, including the 8th amendment, on fixed term parliaments and on the manner referenda are held”