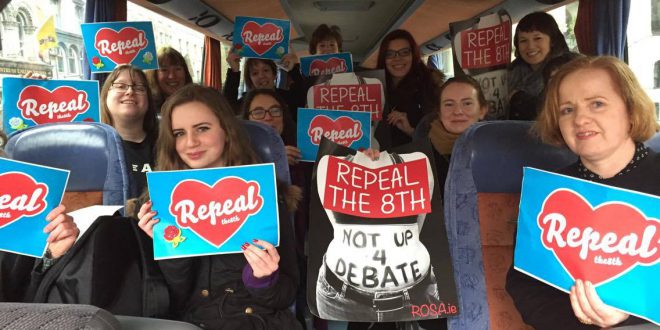 28 October 2017 will mark the 5th anniversary of Savita Halappanavar’s death. Savita was a victim of Ireland’s shameful abortion ban. There should be a referendum in the Autumn for abortion rights. Nothing referencing the ‘unborn’ should be inserted back into the Constitution. The deletion of the 8th amendment abortion ban should then be swiftly followed by the Dail passing pro-choice legislation to protect women and pregnant people’s health and bodily autonomy. This should be in place BEFORE 28 October 2017 as the only acceptable and fitting tribute to Savita.

We are at a crucial moment in the struggle for abortion rights. As the Dail Committee is convened, a massive campaign of political pressure must be launched to push for this. As well as local actions, actions to pressure TDs from the various political parties etc., a major and mass pro-choice demonstration (national, or perhaps regional with marches in every city) should be built for to illustrate that further delay will not be tolerated, nor any attempt to continue to denigrate women and pregnant people’s health and choices.

What the outcome of the Citizens’ Assembly shows is that when people are presented with the facts surrounding abortion, a pro-choice consensus will emerge. In fact, Catholic groups like ‘Family and Life’ that presented to the Assembly were greeted with hostility. With Tuam fresh in the popular consciousness, the overwhelming majority of people wish to see a complete break with the repression of the past, for a secular and progressive state which means full separation of Church and State – Catholic church out of hospitals and schools.

In contrast, the Government and Minister for Health thought they could just hand over a 300 million euro new public maternity hospital to a religious order that owes redress for victims of abuse, and that it would be quietly accepted! The huge public outrage is entirely justified. Catholic influence needs to cease in healthcare, for the sake of women and LGBTQ people, for the sake of progress. The youthful, energetic and inspiring pro-choice movement that exploded onto the streets on International Women’s Day in March of this year needs to join forces with all those battling the Government and backward political establishment in this state, including the Bus Eireann workers, teachers seeking pay equality, housing, traveller and refugee activists etc. in order to build a new political movement of the Left that puts separation of Church and State and equality for all at the centre of its vision.