Home » Blog » One year of ROSA 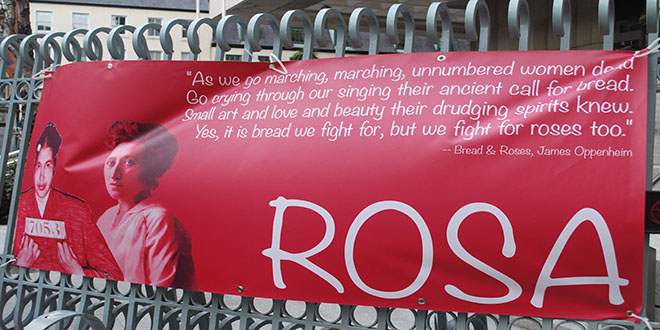 One year of ROSA

A new survey across 28 EU member states indicates that one in three women have experienced a form of physical or sexual abuse since the age of 15. Male violence against women is pandemic, an enormous public health issue, and an ongoing reflection and perpetuation of the continued oppression of women in capitalist society.

ROSA (for Reproductive rights, against Oppression, Sexism and Austerity) was initiated by female Socialist Party activists one year ago in an era of capitalist crisis. With the disproportionately damaging effect on women of austerity well-documented; this crisis also occurs in a society rife with objectification of women in the corporate mass media, with continued lack of abortion rights for women in Ireland as well as the ideological rise of a conservative right attacking abortion rights gained through mass struggle in many other countries.

ROSA was established with a view to developing an initiative with an anti-capitalist perspective on women’s oppression.

As well as organising a series of protests, street stalls and public meetings around the country, ROSA has developed a fornightly discussion group in Dublin that brings a range of women together to discuss politics and ideas. Topics have included ‘Sexism in the media’, ‘The role of women in the Black Panthers’ and  ‘Women in the 1913 Lockout’.

Marta, a Spanish woman living and working in Dublin, says about these meetings that “It’s great to see the interest on women’s issues around the world…and to know that they are so many women out there who are not willing to just accept the current situation.” Marie (15) a school student says she enjoys the meetings because “it helps me to articulate some of my feelings around the oppression of women.” Justine (24), from Canada, describes that “It’s incredibly refreshing to see so many women excited to share their thoughts on a variety of different political matters”.

ROSA was central to organising a successful protest for International Women’s Day, 8 March 2014, supported by a range of groups including USI and the Abortion Rights Campaign. The protest called for a woman’s right to choose, opposed violence against women, and demanded an ending of austerity.