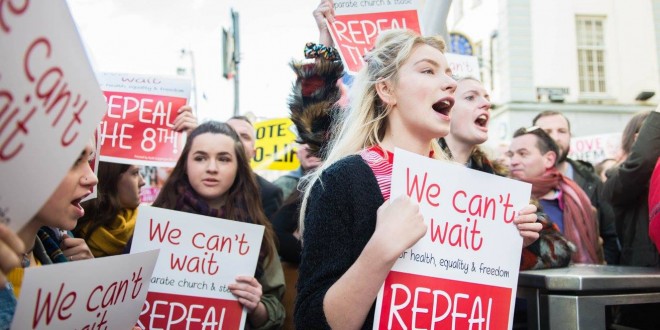 Poland, Ireland & the Fight for a Woman’s Right to Choose

ROSA member, Diana O’Dwyer, recently visited feminist and socialist activists in Warsaw and Krakow for International Women’s Day on a trip organised by the sister organisation of the Socialist Party, Alternatywa Socjalistyczna. In some ways, the struggle for abortion rights in Poland seems to be moving in the opposite direction to here but there are also many parallels between the two countries. She writes here about what we can learn from the Polish struggle for abortion rights.

In Poland, the dominance of the Catholic Church has grown along with the restoration of capitalism in the 1990s and it’s currently trying to get a complete ban on abortion introduced. In Ireland, the Church has been slowly losing its grip over our lives and there is now a strong movement to repeal the 8th amendment, which was inserted into the constitution in 1983 after a campaign by the Catholic Church.

Until 1993 the situation was reversed. Abortion, divorce, homosexuality and contraception were all legal in Poland and abortion on request was freely available through the public health service. Meanwhile in Ireland, abortion, divorce and ‘homosexual acts’ were illegal and condoms could only be bought in chemists. Then as now, women needing abortions were exported to England under a cloud of secrecy and shame. Now, however, the momentum is in our favour. Divorce has been legalised, access to contraception liberalised and the resounding ‘yes’ vote in the same-sex marriage referendum shows people no longer pay heed to the sermons of priests or the pontifications of bishops.  Depending on the poll, 64%[1]-87%[2] of the population favour repealing the 8th amendment and 38[3]-45%[4] are fully pro-choice.

By contrast, in Poland, the momentum has up to now been in the opposite direction. The current law on abortion was introduced in 1993 after a campaign by the resurgent Catholic Church. It bans abortion in all but three circumstances: where there is a high probability of severe and irreversible damage to the foetus, or that it will have an incurable life-threatening disease; where a pregnancy threatens the woman’s life or health; or is the result of a criminal act. These are similar but actually more liberal than the potential grounds for abortion suggested by the establishment parties here if the 8th amendment is repealed. Fine Gael have suggested legalising abortion only in cases of fatal foetal abnormalities and rape; Labour would also allow it where there is a “real and substantial” threat to the woman’s health.

Polish opinion polls show declining support for even this limited level of abortion rights and the most recent attempt by the religious right to completely ban abortion was only narrowly defeated, by 206 votes to 178 in the national parliament. In this context, the anti-choice movement is much more emboldened than in Ireland. Polish feminist activists told me of aggressive confrontations by ‘pro-life’ protesters, who every year try to drown out International Women’s Day protests with loud, expensive sound systems. With 20,000+ on last year’s March for Choice, this would be an impossible dream for Irish anti-choicers. We are also fortunate that attacks from far right fascists on feminist and LGBT activists are not the constant concern they are in Poland.

On the other hand, a November 2014 poll found 37% of the Polish population still favour abortion on request and a poll out just this week found 51% favour liberalising the current abortion law[5].

Effects of the Polish abortion law

An important lesson we can learn from the Polish experience is that permitting abortion only under very limited circumstances does nothing to help the overwhelming majority of women who need abortions.

One of the feminist groups I visited, the Federation for Women and Family Planning, has described the Polish law as ‘fictional’ because so few abortions are carried out under it. In 2011, in a country of 38 million people, there were only 669 legal terminations, 620 of them for malformation of the foetus and only 49 because the pregnancy posed a threat to the woman’s life or health[6].

Significantly, in 2011 there wasn’t a single termination because the pregnancy resulted from a criminal act, even though in Poland this includes sexual exploitation or abuse of dependence, helplessness or trust, forced prostitution, and abusive relationships involving sexual violence as well as rape. This shows how unworkable the more limited rape ground proposed by the establishment parties here would be in practice.

These low numbers are cited by establishment politicians as proof of the law’s ‘success’, even as upwards of 127,000 illegal abortions are performed in Poland each year, and 10-15,000 women are forced to travel[7]. This is more than the 105,000 abortions that were legally performed in 1988! So in terms of actually preventing abortions, restricting it has been a complete failure.

Even when Polish women legally qualify for an abortion, in practice they have rarely been able to get one, or accessing an abortion is so onerous that travelling abroad or risking an illegal procedure seem like better options. Doctors fear criminal prosecution if they misinterpret the law, or are unwilling to openly carry out abortions for fear of damage to their reputation, aggressive anti-choice protests, or reasons of ‘conscience’.

If similar restrictive grounds are introduced here, the result will be the same: a tiny number of legal abortions and tens of thousands of women still forced to travel or undergo illegal abortions.

A similarity between Ireland and Poland that holds out hope for progress is a gradual process of secularisation, which is a feature of all the advanced capitalist countries. A simple way to measure it is declining mass attendance. In 2014, this fell below 40% in Poland for the first time, down from 50% in the 1990s and 57% in the 1980s. This mirrors the trajectory in Ireland, where weekly mass attendance has plummeted from over 80% in the 1980s to 30[8]-35%[9] nationally and 20-22% in Dublin. The most dramatic decline was in the 1990s as the scandal of paedophile priests was first uncovered but it continued to fall 3.7% a year on average from 2008-2014[10]. The biggest drops were in 2009 and 2011, the years the Ryan, Murphy and Cloyne Reports on clerical abuse were published.

In Ireland, it is these scandals more than anything else that have precipitated the Church’s collapse. They have had an effect in Poland too but it hasn’t been as dramatic. This is partly because there are still positive associations between the Church and the Solidarity movement and partly because the Polish establishment has been more protective of the Church’s position. The media seems to be much less socially liberal than the Irish media, whose generally supportive attitude towards LGBT and abortion rights contrasts with its hostility towards wider activism against social or economic injustice.

The lowest levels of mass attendance here are in working class parishes in Dublin where as little as 2-3% go to mass every week. Significantly, this corresponds to the areas with some of the highest ‘yes’ votes in last year’s same sex marriage referendum. For example, Jobstown, where some of the strongest protests against water charges also took place, voted ‘yes’ by a huge margin of 87%[11]. It followed this up last month by overwhelmingly voting left in the last election.

These developments are unsurprising. It is working class communities that have suffered the most from paedophile priests, who were often transferred there by the bishops, and from the impact of austerity. Likewise, the ban on abortion discriminates against low income, migrant and poor women by making abortion more expensive and harder to access. It is because of such social and economic oppression that workers and women have always been at the forefront of radical social and economic change.

The more gradual decline in religiosity in Poland holds out hope that similar processes of social and economic radicalisation can converge there. Surveys show 25-30% of Poles identify as left wing but this is not reflected in the right wing Law and Justice Party government. Likewise in Ireland, despite a significant swing to the left in public opinion we’re facing into one of the most right wing governments in recent history.

In this context, a bright light on the horizon is the rise of anti-austerity, feminist, and radical left organisations. In Ireland, the engagement and activism of young women in fighting for abortion rights is stronger than ever and the radical left has just made an important breakthrough with Anti-Austerity Alliance-People Before Profit winning six seats on a strong pro-choice platform. In Poland, a new left party called Razem, which positions itself to the left of traditional social democracy similar to Podemos, also made significant progress by winning 3.2% of the vote in the last elections.

Activists I met from Razem, the 8th of March Alliance, Alternatywa Socjalistyczna, and other groups that organised the successful International Women’s Day demonstrations in Warsaw and Poland, were really interested in the parallels between Ireland and Poland and encouraged by the progress we are making here. They were particularly enthusiastic about ROSA’s radical activism and how they might adapt some of our methods to the Polish situation.

This type of international solidarity and learning from each other’s experiences in fighting the structures of social and economic power than oppress us all are vitally important in the struggle for reproductive rights, against oppression, sexism and austerity!

[4] Amnesty International and RedC, “Public Attitudes Towards Decriminalisation Of Abortion,” May 2015, https://www.amnesty.ie/sites/default/files/report/2015/07/Powerpoint%20for%20web.ppt.