Home » Blog » Why you should protest on International Women’s Day 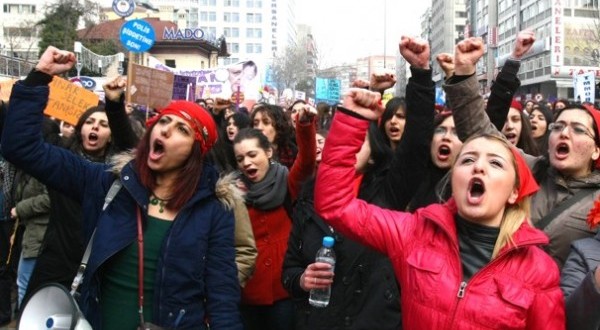 Why you should protest on International Women’s Day

No to austerity & wealth inequality

International Women’s Day was established by women in the labour and socialist movement over 100 years ago as a day of protest by girls and women workers, whose battle cry was for ‘Bread and Roses’; for better pay and conditions, against war, and for a ‘sharing of life’s glories’.

In 2014, the Oxfam Global wealth report has just illustrated that the richest 85 individuals in the world own as much wealth as the poorest 3.5 billion. In Ireland, over 10% of the country’s wealth is owned by the richest 1% of the population. It’s well documented that austerity, the planned wrecking of living standards of the majority in the interest of a super-rich elite, particularly affects women. The government’s talk of recovery means it’s time to make them put their money where their mouth is and demand an immediate ending of austerity.

Support a woman’s right to choose

Legislation passed last year by the government is an utter concession to the anti-choice lobby and does not protect women’s health, or do anything to address the reality that almost 4,000 women give addresses from this state when attending clinics and hospitals to access a safe and legal termination in Britain each year. Migrant women, young women, women in abusive relationships and ill women who face restrictions on their travel, and women impoverished by austerity are all the most affected by the state’s continued restrictions on their rights. Protest on international women’s day to demand a repealing of the 8th amendment – get the dangerous and discriminatory pro-life clause out of the Constitution.

End sexism, violence against women & say NO to rape culture

Robin Thicke’s infamous ‘Blurred Lines’ song that sought to blur the lines between rape and consensual sex, while turning women’s bodies into objects and commodities, should be a rallying cry for women and men who are opposed to the prevalence of sexism in the media, the purpose of which is to make girls and women deeply insecure so that they remain

major consumers of the mega-profitable beauty, fashion and cosmetic surgery industries. Backward and sexist portrayals of women feed into the continued epidemic of violence and sexual violence perpetrated against women in Ireland and globally. It’s time to say ‘enough is enough’ – protest on 8 March against sexist objectification – reject rape culture – and end violence against women.

2014-01-23
admin
Share
Previous 95th Anniversary of the Death of Rosa Luxemburg – Public meeting photos
Next Beyonce’s trivialising of violence against women; Should be the last word in ridiculing her ‘Feminist Icon’ status