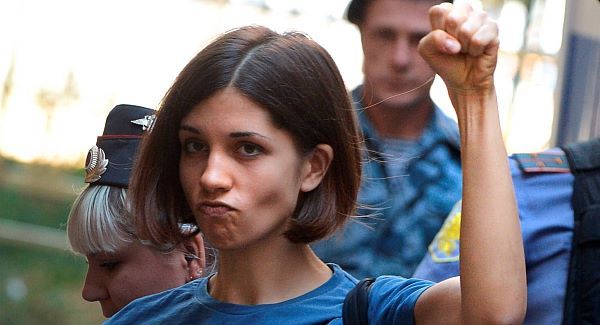 Nadezhda Tolokonnikova, a Russian political activist and member of the punk group Pussy Riot, was jailed in August 2012 for hooliganism and blasphemy. Her crime was to stage an anti-Putin protest, along with two other performers, inside Moscow’s Orthodox Cathedral. Despite claims that Russia has made steps towards becoming a more open or permissive society, those in power took immediate steps to silence the band’s radical feminist message. Putin’s regime could not tolerate musicians whose stated goal is to combat “the repressions of a corporate political system that directs its power against basic human rights and civil and political liberties.” Therefore, legislation citing “religious hatred” was manipulated in order to convict the trio.

Things took an ominous turn this October when Nadezhda’s family declared her missing. The woman’s correspondence, including open letters detailing her shocking prison conditions, suddenly halted for three weeks when she was transferred from a penal colony in Mordovia. Speculation circled regarding the inmate’s whereabouts. However Nadezhda was recently located in a Siberian tuberculosis hospital, reportedly receiving treatment after a prolonged hunger strike. “Basically someone who works in the prison told me she is in the hospital,” explained her husband, Pyotr Verzilov. “So we sent our lawyer there and he spoke to the prison head, who eventually confirmed she is there.”

Once her health improves Nadezhda will be moved to a facility in Krasnoyarsk, according to Russia’s Federal Prison Service. This region’s labour camps are notoriously brutal, with temperatures commonly fixed at minus 50 degrees Celsius, and a score of murderers, rapists, terrorists behind the barbed wire. Nadezhda’s detention here is yet more evidence that her charges were politically motivated. The decision to jail Pussy Riot is part of an on-going campaign aimed at smothering all anti-Kremlin voices. Those who have dared to oppose Putin, whether on the issue of LGTB rights, corruption, or freedom of expression, have been met with ruthlessly dictatorial measures. Wiretapping, arbitrary imprisonment and police violence are now commonplace.

Under these circumstances it is vital for the international community to mobilize, demanding the release of Russian dissidents like Nadezhda, and an immediate end to state repression.

Previous A Day in the Life of a 16 year old Socialist Feminist
Next Gender quotas for company directors: A step to genuine equality?