We had a great public meeting quizzing the candidates on their positions on a number of women’s issues. In attendance was 2 out of 3 women standing for Limerick (Jan O’Sullivan TD, Labour Party and Sarah Jane Hennelly, Social Democrats) and only 1 out of 16 men (Cian Prendiville, Anti Austerity Alliance). 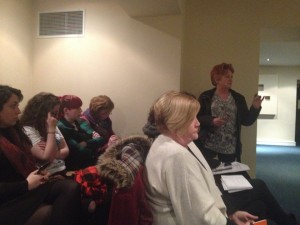 A ROSA activist asked the candidates their position on Fine Gael’s citizen’s convention. If they were in government, whether a minority party or not, would they hold a referendum to repeal not amend the 8th amendment? All of the candidates replied yes – repeal then legislate. However Jan O’Sullivan then said, I’m not going to say this is a red line issue. You go in with strong positions and then you make compromises depending on who you are up against (!!) 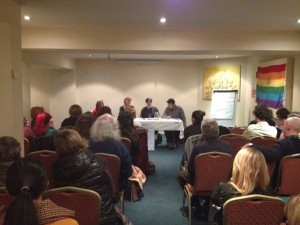 ROSA demanded a reverse to the cuts to One Parent Family Allowance and for free, accessible childcare (funded through progressive taxation, like Education). There was great contributions from the Limerick’s Women’s Network about the need to tackle the patriarchy to challenge the oppression of women on top of funding frontline services to women’s shelters and domestic abuse services. Rape Crisis MidWest questioned the Social Democrats and the Labour Party on their position of abortions in the case of rape – how do they foresee abortions in the case of rape victims working as only 10% of rapes are reported? Will a women have to ‘prove’ her rape, have her rapist convicted, if she is to be allowed an abortion? We spoke about the pension gap – caused by women having to work part-time or forced out of work in order to manage child care. This unpaid labour is not valued the same by society and so women end worse off in their pensions and significantly poorer than men. We spoke about the need to separate church and state and the epidemic of the mental health crisis in Limerick. Women in Limerick have the highest rate of self-harm in the country. 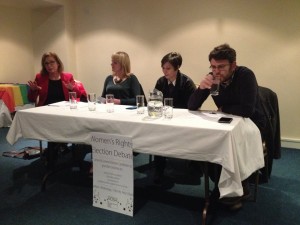 All in all a great discussion and very illuminating that so few of the candidates showed up. Attached is a list of the Limerick candidates and their positions on abortion rights. We hope this is helpful for our friends in Limerick.