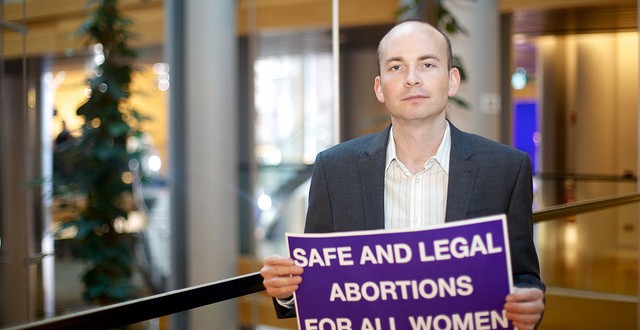 Arriving outside the European Parliament in Strasbourg on a mild autumn Monday afternoon, Members of Parliament (MEPs), were confronted with a group of protestors of a particular kind. Reactionary “Pro- Life” and “Anti LGBT Rights” activists had gathered to protest against a report on “Sexual and Reproductive Health Rights”, scheduled to be voted on Tuesday which, according to these “anti-choice” campaigners, “reads like a horror novel crowned with 12 EU stars.”

The real horror novel unfolded in the chamber unfortunately as the European Conservatives and Reformists proposed a procedural motion to refer this report back to the Women´s Rights and Gender Equality (FEMM). A majority of MEPs supported this proposa, with 359 voting for, including Fine Gael and Fianna Fail MEPs, 319 voting against and 18 abstaining. This seems to be motivated by the hope of delaying the report by so much that it will get dragged into the next Parliamentary term and they hope to have an anti-choice majority in the Parliament by then.

This report was drafted by Edite Estrela, a Portuguese MEP from the group of the “Socialists and Democrats” (‘social democrats’). The report deals with Sexual and Reproductive Health Rights and in parliamentary terms is called an “own initiative report”. This means that the report is not legally binding but solely makes recommendations and expresses the Parliament´s position on the issues.

The fact that those reactionary groups protested outside the Parliament today and that a majority voted to refer the report back to the committee confirms what a number of women´s rights and LGBT organisations have been experiencing in the recent period. Namely, that there is an increased aggressiveness and self confidence on the part of those organisations which needs to be met with a firm and determined response.

As an alternative, their leaflet, bizarrely headlined “European Parliament: Blitzkireg against the culture to life” they suggested MEPs vote in favour of the resolution that was tabled by the Europe of Freedom and Democracy (EFD) Group, a group which is made up of right wing populist and racist forces, such as UKIP (UK Independence Party), the far right Freedom Party (FPÖ) from Austria, the Northern League from Italy and the conservative, chauvinist and catholic United Poland party.

This alternative resolution reads like another horror novel. It “invites Member States to include the promotion of (natural) family planning methods in their public health policy”. It also states (in paragraph 8) that it “recalls that no person, hospital or institution should be coerced, held liable or discriminated against in any manner because of a refusal to perform, accommodate, assist or submit to an abortion or any act which could cause the death of a human foetus or embryo, for any reason;”

It continues to say that “in accordance with the principle of ‘public policy doctrine’ and internationally accepted standards – that a child´s parents or legal guardians have the freedom to ensure that the child receives an education in conformity with their own convictions, and that children should not be compelled to receive teaching on sexuality education, including the promotion of Sexual and Reproductive Health Rights and abortion, against the wishes of their parents or legal guardians, the best interests of the child being the guiding principle.”

What will happen next?

This will only be a temporary victory for the right-wing forces because a big majority in the FEMM committee already voted in favour of it (18 to 6 votes). This means that no significant changes will be made to it and it will come back to the Plenary in a similar shape where it will be voted on probably in the next months.

Then the tactic of the right-wing is, with amendments, to strip the report of the positive aspects that are in it. Many amendments were tabled by the same EFD group but also by the biggest group the European People´s Party (EPP), to which Fine Gael belongs which aim to take out important issues such as a call on Member States to ensure access to fertility treatments and assisted medical procreation for single women and lesbians as well as a call on Member States to refrain from preventing pregnant women seeking abortion to travel to other Member States or jurisdictions where the procedure is legal. Obviously, in the case of Ireland this is unfortunately still the only safe way for women to have a termination of their pregnancy.

The amendments continue in this way. Another attempt is to take out a paragraph that high quality abortion services should be made legal, safe and accessible to all within the public health systems of the Member States. The EFD group even goes as far as trying to take out a paragraph that states that women that are pregnant as a result of rape, or where there is a risk for the woman´s health, must have access to abortion.

Defend the woman´s right to choose – What is in the Estrela report?

The Estrela report is by no means revolutionary or radical. It is a progressive report in the sense that it defends the woman´s right to choose and to set a safe environment for women who choose not to have a baby. At the same time, it wants to give equal rights to all those persons who wish to have children, regardless of their sexual orientation or sexuality.

It states that Sexual and Reproductive Health Rights are human rights which are universal and should apply everywhere.

The report also deals at some length with the question of sexual education. In the typical European Parliament language, it “stresses that sexuality education must be designed and implemented in a holistic, rights-based and positive way, emphasising the development of life skills and including both the psycho-social and bio-medical aspects of sexual and reproductive health rights; underlines that sexuality education must be provided in a safe, taboo-free, interactive atmosphere between students and educators;”.

It also calls on Member States to make sex education classes compulsory for all primary and secondary school children and that a special emphasis on respect for women and gender equality should be made.

However, all of that proves to be too radical for members of the EPP and EFD group, who wish to continue to portray a conservative and outdated idea of the family that is based on a heterosexual couple and excludes the rights of single parents or LGBT couples etc.

This report comes at an important point in time, almost coinciding with the first anniversary of Savita Halappanavar´s tragic and unnecessary death. The wrong message was sent by the Parliament today to the Irish government – suggesting that it can ignore the mass movement that was built for abortion rights. Those who believe in a woman’s right to a free safe and legal abortion and the right of everyone to comprehensive non-discriminatory sex education, should mobilise to pressure MEPs to ensure the right message is sent in a few months time.

You can read the full report here