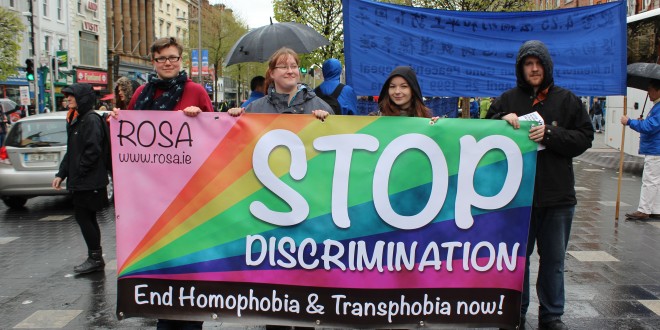 Resounding YES to LGBTQ Rights – Next Step – Repeal the 8th

As well as a blow to homophobia and a hugely positive recognition of LGBTQ lives, the inspiring and decisive marriage equality referendum victory is a robust boost to the fight for a referendum to repeal the 8th amendment as a mobilised and politically engaged section of LGBT people, women, the working class and young people that were a central impetus behind the resounding Yes victory, seek to continue the fight for equality and progress.

Speaking on 25 May, Ruth Coppinger TD branded Labour’s attempt to cash in on the referendum result by promising a repeal 8 referendum if they happen to be part of a new Government next year as “hollow, insulting and manipulative”. She continued, “There were massive demonstrations for abortion rights following the tragic death of Savita Halappanavar – the opportune time to propose an Amendment – but Labour supported the disastrous Protection of Life During Pregnancy Act and a 14-year jail sentence for women! Labour trooped in to vote down a Bill on Fatal Foetal Abnormality only two months ago and a Repeal the 8th Bill moved by the Socialist Party only two weeks ago. How can they be taken seriously? If Labour really mean it, they can insist that a referendum is held in the Autumn for deletion of the 8th Amendment to give women real equality and control of our own bodies.”

Notwithstanding this hypocrisy, and the hopelessly limited legislation (fatal foetal abnormalities) that Sinn Fein and Labour advocate linked to repeal, the fact that both of these parties have been pressurised to pass motions at Conferences committing to a referendum is significant and it’s clear that the 8th will feature prominently in a General Election. Campaigners must be vigilant to guard against any proposal to replace or alter, as opposed to delete, the 8th amendment.

The Marriage Equality referendum represented a new social movement; 200,000 registered in the run up to 22 May, 50,000 came home to vote, ‘Yes Equality’ badges were ubiquitous, there was a groundswell of spreading the ‘Vote Yes’ message through social media and talking to friends and family, and hundreds of people across the country who never did anything of the sort in their lives before joined a door-to-door canvass. This social movement shows, not only what we can and must build in order to ensure our right to a referendum, but also the potential to build a Yes campaign that can win. While the ‘hard cases’ and the reality that women’s lives and health are endangered by the 8th will undoubtedly play a crucial role in securing a ‘Yes’ vote in any future referendum, the abortion rights movement cannot limit the debate to the ‘hard cases’ and has to raise the reality that women travel for abortions and get illegal abortions in Ireland every single day, and that these women must not be ignored and cast aside any longer.

There has been a huge radicalisation on social attitudes, with the young and the working class at the forefront. There has not, however, as Varadkar has claimed, been a ‘social revolution’. We need one though and on 22 May we saw the potential that exists for a movement to truly break with the oppression of the past, and to fully separate church and state. The Catholic Church is fundamentally undermined and even in crisis after the referendum result, but the solid reality remains that the Catholic Church still controls the majority of public schools and hospitals. The fight for repeal could ultimately be a huge impetus to building a social movement and a left political force that can, in unison with the anti-water charges, anti-austerity struggle, build the basis for a Left Government that would consciously and fully break the Church-State link in all its guises.