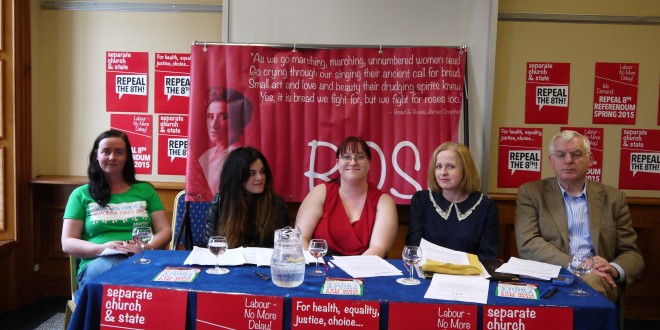 “Today, the Socialist Party deputies will introduce the Thirty Fourth Amendment to the Constitution Bill to allow for a Referendum to Repeal the Eighth Amendment. The effect of this Bill would be to delete Article 40.3.3, the Constitutional ban on abortion, allowing the national legislature, the Dáil, to then legislate for abortion in Ireland.

“We believe this is now a life-and-death issue for women in this country. This sectarian, anti-woman Amendment can no longer be tolerated. As the ‘Miss Y’ case shows, the most vulnerable women who face restrictions on their travel —  working class women impoverished by austerity, asylum seekers and migrant women, women in abusive relationships and ill women – are the ones most affected by Ireland’s abortion ban.”

“We are calling on the Government to accept this Bill, introduce it and allow people have their say in the Spring when a range of other referenda are planned. A Repeal the 8th referendum must be included. The women and girls affected by the 8th had no vote in 1983. ”

“The recent Protection of Life during Pregnancy Act has been shown to be a tragic farce. Medical guidelines just published ominously make explicit reference to C-section and early induction. Is the Labour Party in government going to continue the legacy of a Catholic Church-influenced State, of Magdalene Laundries, Mother and Baby Homes and Symphysiotomy? Of controlling women’s bodies and denying them healthcare and rights?”

“We wish to win two ‘Yes’ votes in one day in the Spring of next year – for Marriage Equality, and to lift Ireland’s abortion ban – and strike a major blow against Church insistence on dictating crucial personal choices in people’s lives. The latest poll shows that 56% support a referendum in the lifetime of this Government, with only 19% against, so why does the government repeat the mantra of ‘no appetite’?”

“Labour’s hypocrisy on this issue stinks, and ROSA will be availing of all opportunities in our new campaign, “Repeal the 8th in Spring 2015”, to pressurise them.”

“The establishment in this State is wedded to the past – we will wrench them into the 21stCentury kicking and screaming. Young people are light years ahead of the conservative Government and establishment. Since ROSA was formed a year and a half ago, we’ve done endless street stalls. We’ve collected petitions. While we’ve been out talking to ordinary people about abortion rights, we’ve seen what’s crystal clear – the majority of the population want change, want progress, want equality and a secular state.”

“Contrary to Minister Varadkar’s statements, and having had over 30 years to consider the matter, we know exactly what we want: a referendum to repeal the Eighth Amendment. The March for Choice at 2pm on Saturday at the Garden of Remembrance is a chance for people to speak with their feet and show the government that we trust women to decide for themselves.

“The Irish government believes that there is ‘no appetite for change’ on abortion in Ireland. Saturday 2pm is the time to be loud, prochoice and proud. ”