Spain’s New Abortion Law: A crime against the freedom, health and life of women 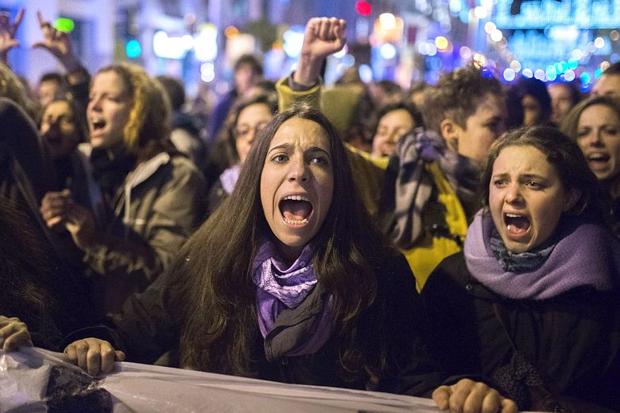 For the right to legal abortion, as part of a public health system.

On 20 December last, the Spanish government gave the green light to a new law on abortion that is amongst the most restrictive in Europe. The Minister of Justice Alberto Ruiz-Gallardón has pushed Spain back 30 years, with a system even more restrictive that that in place between 1985 and 2010.

The Minister showed us the true ideology that is behind this reform with statements like ”the freedom of motherhood is what makes women truly women’. It is an ideology that is backward and sexist, which only values ​​women for motherhood. For him, women are not mature enough to make decisions about their own bodies and for this reason; the state must judge these decisions. In reality, the restriction of the right to abortion will establish first-class abortions – those performed abroad, alongside second or third class illegal abortions, which may have fatal consequences for women.

The new law eliminates the right of women to freely decide whether to continue with their pregnancy or have an abortion during the first 14 weeks of pregnancy. This system, known as the ‘law of time’, where abortions are only restricted after a time period), will change to another system where abortions are only permitted in two cases: rape (up to 12 weeks of pregnancy) or where there is a “grave risk to the life or the physical or mental health of the pregnant women” (up to 22 weeks of pregnancy). Currently over 90% of the abortions carried out in Spain do not fall under these two categories which are allowed under this new law.

In the case of rape, women are obliged to report the rape to the authorities and, in the case of a risk to health; she must have two different medical opinions to prove that her health is really in danger. Both of these medical opinions must be signed by health professionals specialising in the medical complications being suffered by the woman. A prison sentence awaits any medical professionals that carry out an abortion without these medical opinions in place. The law also protects conscientious objection, that is to say that it gives more rights to doctors and medical personnel that refuse to practice an abortion for moral reasons.

The reform outlaws abortions for foetal abnormalities which can now only be performed when the abnormality is “incompatible with the life of the foetus” and that this represents a psychological risk to the women. The woman must prove that these two conditions are present, and must get two medical reports, one on the health of the woman and the other on the health of the foetus. A woman can only claim psychological damage in the first 22 weeks of pregnancy. This new law does not offer any coverage for foetal abnormalitiesthat are supposedly compatible with “life” but are extremely serious, incurable or that are diagnosed late.

Even more humiliating, minors must obtain the consent of their parents to have an abortion. If the parents or guardians do not give their consent, a judge will have the final decision. It must be remembered that this still is only permitted in the limited cases, rape or serious health risks. In addition, women who satisfy all the conditions must take compulsory counselling. Women’s organisations have warned that this task could be given to private religious or anti-abortion organisations. This means that women will have to face a series of arguments about the right to life of the unborn in an attempt to make them change their mind before undergoing the abortion.

Hypocrisy and the right to life

The new Bill is fully in line with the rest of the “reforms” or restrictions on rights that the Rajoy government have introduced since coming to power. The introduction of fees to have access to basic rights such as health services, justice or medicines, for example.

Since last August, the financing of the latest oral contraceptives have been stopped, and a growing number of other forms of contraceptives must be paid for, which is making access to them more difficult for women who are in financial difficulties. In the same way, the government has demonstrated its hypocrisy in using the defence of right to life of people with disabilities as an argument in favour of the new restrictions on abortion on foetuses with foetal abnormalities. However, they have no conscientious objection when implementing cuts funds which assisted people with disabilities lead independent lives.

These cuts, according to recent reports, every ten minutes a person dependent on care loses their services and every 30 minutes a job in the care services is lost. The majority of workers in this sector are women. Even if the number of people receiving care diminishes each year due to the natural decline in numbers receiving care as a result of a number dying each year, the waiting list continues to get longer because the services are not replaced.

In addition, the crisis particularly touches women, in so far as they largely take up the tasks that have been dropped by the authorities due to austerity policies. Women have the tendency to care for dependents in the family until financial assistance or social services arrive. In the majority of cases, women caring for dependents are not able to get work as a result. Meanwhile, some sectors continue to make large profits despite the crisis, notably private health services and privatised public services, which are enriching a small few.

A question of gender and class

Until 1985, abortion was completely forbidden in Spain. It was only during the second Republic between 1936 and 1938, during the civil war, that abortion was permitted in Catalonia for a brief period of time. In 1985, the first law on abortion, introduced by the “socialist” government, decriminalised abortion in just three cases: risk of the health of the woman, rape (until 12 weeks of pregnancy) and malformation of the foetus (until 22 weeks). The Zapatero government in 2010 passed a new law which permitted free abortion during the first 14 weeks of pregnancy, until 22 weeks in the case of risk to health or foetal abnormalities and at all times when there is a foetal abnormality that is incompatible with life.

PSOE (Spanish Social Democratic party – affiliated with the Irish Labour Party) have tried to convert the question of abortion into simply a question of gender and have promised that if returned to power, they would return to the ‘law of time’. We cannot, however, wait for the next elections to abolish this law, nor can we trust the social democratic “lesser-evil”. The government of Zapatero had cut €15 billion from public services. During 2012, they cut the budget of the care sector by 13% and the education budget by 21%. Like we have already seen, these cuts affect women on the double: on one side, women take responsibility for the care in the family, and on the other side, there is a big loss in jobs in the sectors that are mainly made up of women workers.

In the past, many demands put forward by the women’s rights movement have been won, but the current situation shows that the substance of the question has not been resolved. We cannot afford such an ideological attack on women. But we also cannot afford that women have abortions for financial reasons or because they are not able to combine work and motherhood. To have a real choice we need: