Home » Recent Posts » The “Stand with Her & all Survivors” demo, sex workers and ROSA 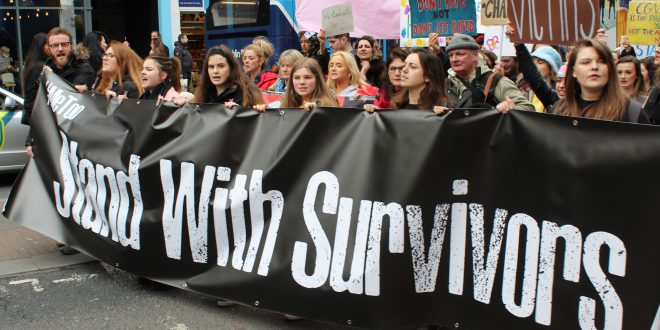 The “Stand with Her & all Survivors” demo, sex workers and ROSA

Activists in ROSA assisted the organising of a march of up to 8,000 under the banner of “Stand with Her & all Survivors” in Dublin on Saturday 31 March. This significant demonstration was agreed at the near spontaneous protest that took place at the GPO on Thursday after the verdict in the Belfast rape trial. It was an angry, youthful, defiant demonstration and a snapshot of the potential to build a movement to challenge victim-blaming, macho culture, sexual violence, and male violence against women and gender non-conforming people.

In the spirit of this spontaneous movement from below, the ROSA activists in Dublin, alongside Ruth Coppinger TD who helped co-ordinate the arrangements, felt it appropriate that within reason anyone who wanted to speak should be allowed to speak, rather than be excluded. When the demonstration was agreed at Thursday’s protest a number of people immediately approached us about speaking on Saturday. To be inclusive, ROSA contacted a number of groups and invited them to send a speaker for Saturday, the groups contacted were the Dublin Rape Crisis Centre, the Sex Workers Alliance Ireland (SWAI) and UCD Consent.

A number of speakers on Saturday spoke of their own experiences. One spoke about being a victim of childhood sexual abuse, and of experiences in the sex industry. Some comments offended some demonstrators who saw them as stigmatising those who work in the sex industry. These were that person’s personal views and clearly didn’t represent the views of all demonstrators, nor are they the views of ROSA for that matter. However, people have a right to their opinions and obviously it would have been completely incorrect to censor anyone speaking at such an event. We attempted to create balance by inviting others to speak, unfortunately not all the groups were in a position to attend.

There may be some confusion about the status of some of the speakers. It is very unfortunate that the approach and motives of ROSA activists have been questioned by some, including that the protest itself or ROSA activists were anti sex worker.

This is untrue and unfair. ROSA activists adopt a fighting and active approach, whether that be in highlighting availability of abortion pills or facilitating this new movement to get organised, as we did effectively over the last week. ROSA is fully supportive of sex workers organising collectively for their rights and safety. All sex workers must be absolutely welcome to play an active role in any collective movement or struggle against sexual violence, and indeed have the space to raise their own issues and experiences within such a movement.

ROSA, like many, does take issue with objectification of women and trans people and with the sex industry.

For anyone interested, here is an article that explains in detail the approach that Ruth Coppinger, Socialist Party & Solidarity TD and founding member of ROSA, took to the Sexual Offences Bill that went through the Dail in 2017. Ruth proposed a series of amendments to ensure concrete improvements in safety for sex workers, while opposing the sex industry moguls. http://socialistparty.ie/2017/02/ruth-coppinger-td-sexual-offences-bill/