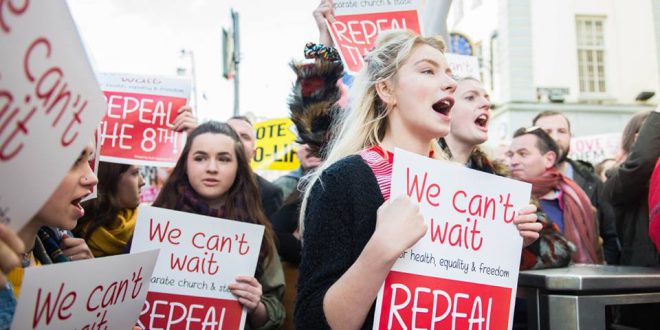 In 2014 , Irish Parliamentarian Ruth Coppinger and the grassroots organisation ROSA approached  Women on Web and Women on Waves to collaborate and since we have worked closely together. We collaborated in several high impact campaigns (abortion train in 2014, abortion bus 2015 and 2017 and theabortion drone 2016).

In support of a law proposal by Ruth to legalize abortion in October 2016, the University of Texas published scientific research about the number and experience of women who used the Women on Web service. Another study about the safety of the use of medical abortion in Ireland was published in May 2017.

Although Irish customs had started confiscating all types of medication coming in through mail already in 2008,  Irish women were able to access the abortion pills through Northern Ireland and support networks. Unfortunately, a few times a year also the post in Northern Ireland has periods it refuses to deliver the packages. This has been happening  since Women on Web started in 2005  and  a new package is always reshipped –  so that all women are able to receive the medical abortion. The actions with ROSA created more awareness about the possibility of the use of abortion pills in Ireland and the number of women being able to have a safe abortion with the pills increased,  more than 200 per year since we started our collaboration.

The data of the scientific research was presented in the Citizens Assembly  that was established in October of 2016 to advise the government on reforms of the restrictive abortion law in Ireland. Dr Abigail Aiken, the main researcher,  was invited to testify before the Joint Oireachtas Committee on the Eighth Amendment.  She presented the research about the safety, effectiveness, and acceptability of medication abortion through Women on Web in Ireland, as well as new research on Irish women’s decision-making when they need to obtain abortion services, and their experiences both with traveling abroad and availing of online telemedicine services at home.

In September 2017, the media reported that most Fine Geal ministers still believed only a very restrictive abortion law would pass  and none of the 4 big parties supported legalizing abortion till 12 weeks.

However, the testimony about the use of abortion pills in Ireland swayed the opinion of all the parliamentarians, even the conservatives. And on December 14 th, 2017 the Oireachtas committee called for abortion to be legal for all women up to 12 weeks.

As Fine Gael minister Regina Doherty stated in December 2017: “ I think the state has finally really recognized that we have a problem  with women buying illegal abortion pills online and we realize we need to mind those women….”

Many Ministers have now come out in support of the proposed law change. The referendum is expected to take place in May 2018.

2018-03-11
admin
Share
Previous ROSA’S Yes Campaign-#Time4Choice
Next The “Stand with Her & all Survivors” demo, sex workers and ROSA