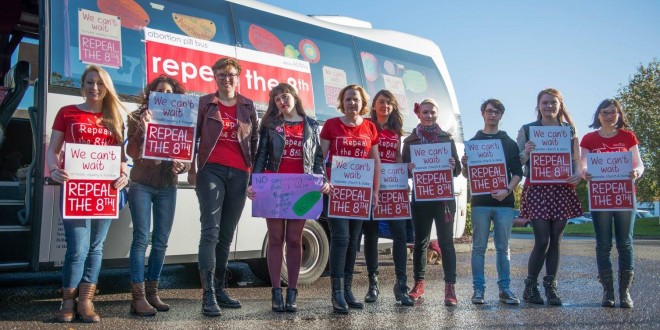 “We will win because failure is not an option”

As a young woman in Ireland, the fight for free, safe and legal abortion feels very personal. Women I know and love have had to have abortions and I do not condemn them, in fact I applaud them. Getting access to abortion as an Irish woman requires heroic endurance, ingenuity, self-reliance and guts so every Irish woman who has had a lonely, expensive and wearying abortion abroad is a heroine. But this heroism should not be required of her.

Nevertheless she is lucky, a survivor. It is the young women, the sick women, the migrant women and the homeless women who suffer the most. They are trapped in their unwanted, feared and dangerous pregnancies in this State where we are second-class citizens by virtue of being denied autonomy over their own bodies.

Without freedom to dispose of our bodies according to our own moral compasses we do not have the most basic of human freedoms. Uniquely as a fertile woman my body appears in the Irish Constitution where its value is parsed as being below that of any other person.

The eight amendment was passed in 1983: No Irish woman of current voting and reproduction age got to vote on that amendment. A generation of Irish women have grown up to suffer under this cruel and repressive regime without having had a chance to have their own democratic say. I

The recent film Suffragette, depicted the terrific fight our foremothers put up, including puttting their lives and health on the line, to get the vote for women. We are supposed to have won that fight, but where’s my vote? When do I get to vote on this issue which is hurting and killing my sisters?

The eight amendment was built on a huge lie. It was sold as a vote to protect children. X was a child; Y was barely more than a child; Savita Halpanavaar and the brain-dead woman who was used as an incubator did not suffer death and grotesque indignities to protect any child.

Legalization of abortion can prevent the unnecessary suffering and death of women. Restrictive abortion laws violate women’s human rights based on agreements made at the UN International Conference on Population and Development in Cairo, the Fourth World Conference on Women in Beijing and the Universal Declaration of Human Rights. In denying abortion Ireland is out of step with the rest of Europe and the World.

Recently I went to see the Train at the project arts center in Dublin. This is a musical about the women who defied the, what everyone almost without exception now agrees was a, thoroughly ludicrous ban on the contraceptive pill. They were prepared to defy the law because it was unfair; harmful and stupid. Well so is the current law on abortion.

In the film Suffragette a Policeman tells a woman campaigner she must accept the law and she says she will not: it is not her law; she had no say in it. I say the same about the eight amendment and the laws that flow from it: it is not my law; I had no say in it and I will not abide by it.

This is my generation’s campaign for suffrage, for basic human dignity and fairness and we will do what is necessary to have our voices heard. Like the vote for women we will win because failure is not an option.