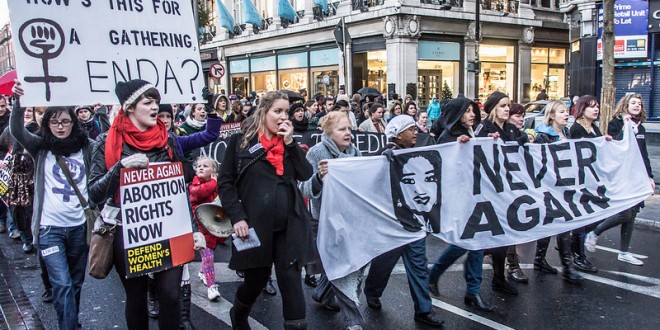 X is Not Enough, Fight for Repeal Abortion Rights now

For the first time ever, an Irish government has been forced to consider abortion legislation – a historic step – but under the severe restrictions of the Constitution.

The legislation would Include abortion where a woman’s life is at immediate risk, but possibly narrowing the threat of suicide as grounds to only include women who can prove definite suicide intent. It will still possibly exclude women with fatal foetal conditions. It would definitely exclude victims of rape and incest and women with medical conditions whose health is endangered by pregnancy.

The tragic Death of Savita Halappanavar sparked mass protest and exposed Ireland’s medieval treatment of pregnant women, who are equated with embryos and foetuses in a non-secular health system.

The slogan of demonstrations following Savita’s death was ‘Never Again’. But the reported legislation won’t guarantee this, unless it is broadened to allow abortion on the grounds of health.
This requires Repeal of the 8th Amendment and must be campaigned for. Public attitudes have clearly changed. 85% support abortion to save a woman’s life, 82% to protect health.

We believe the pro-choice movement should not tactically focus on X Case legislation first, then repeal at some stage in the distant future. The two could be done simultaneously and are the minimum needed to defend women’s health.

They are also widely supported in Irish society, so why ask for less? Why should a woman with cancer have to leave Ireland for a termination needed to continue life-saving chemotherapy? Is it acceptable that for years more, women should endure thresholds of suffering until doctors are sure their life, not their health, is at risk?

These grounds for abortion exist in countries such as India, Pakistan, Burkina Faso, Cameroon, Rwanda, Kenya, Chad, Ethiopia – in fact most of the world. Yet we are told Ireland is part of a modern Europe.

These countries legislated because the safety valve of export to neighbouring countries does not exist.

The 13 women (at least) who travel daily for abortions from Ireland are hypocritically shunned from this country. Austerity and the recession will further remove the choice women have as to whether or not they can have children. It will also put the substantial costs for abortion out of reach for many working class women. Safe, legal abortion should be provided through our health service without cost.

Mass mobilisations created the pressure to force the backward Irish establishment to reluctantly move on this issue. We need to maintain the momentum and press for X Case legislation and Repeal of the 8th Amendment.

Join with us in fighting on this issue, for real choice and equality for women and for long-overdue separation of church and state in this country.

Previous Can society be rid of anti-gay prejudice?
Next Rape Culture & Capitalism